Hi, I know it’s been quite some time since I had last posted an anime review. If some of you don’t already know, I’m currently now on my summer break, therefore I have plenty of time to kill by completing anime series. So long story short, I was really busy this year (caught up in school and other stuff) leaving me with not much spare time to seriously watch new Animes. Tamako Market was one of them.

I was actually pretty excited to watch this series, when it was first released because it was produced by Kyoto Animation. Kyoto Animation also produced the anime series: K-ON! Which I’m a really big fan of. The drawings are also really similar! Since these two series were produced by the same people I was sort of expecting their story lines to be pretty similar. Initially, I thought that Tamako Market was going to be a story based on the lives of these three ordinary female students. However, it didn’t really contain as much ‘Slice of Life’ in it as I had hoped.

However, there are still a lot of Slice of Life scenes in it! Don’t get me wrong.

Tamako Kitashirakawa, the main heroine of this series, is the eldest daughter of a Mochi Maker. (Haha, Mochi Maker..? Sorry, her father runs a family store where they make and sell mochi.) Tamako helps out a lot, she wakes up early every morning to help make fresh batches of Mochi to sell. (There’s your Slice of Life bit.. ^^) This family’s Mochi store is just one of the many stores found in Tamako Market. [If I’m not wrong I’m pretty sure that that’s the market’s name.]

Anyway, I still have to say that even though the storyline was not really what I had hoped it would be, I still thoroughly enjoyed watching this series. And if you haven’t already watched it. Now is the perfect time to since it starts off at the start of the new year. Which is extremely important for Mochi stores. Or any traditional Japanese Sweets stores. Though Mochi isn’t technically a sweet.. but it is..?

NOW ONTO THE SPOILERS

If I had to pick my favourite character, I would probably pick Tamako’s father. I’m not trying to give any spoilers but you’ll love him so much more after completely episode 9.

Okay, actually I give up, I’m just going to go all out and ruin it for you, so stop reading if you want to back out.

I absolutely loved the ending for episode 9. There was a mix of sadness and explosive cuteness just messing up my system. You’ll get what I mean.

My thoughts on the characters:

Tamako Kitashirakawa 北白川 たまこ: Honestly, (And this is strictly just my opinion though I sense I’ll be getting some hate) I think that Tamako’s just the typical cliche female lead in pretty much 80% of all animes out there. She’s nice, sweet and the perfect girl all-round. You just can’t hate her. But for me: I’m just going to toss her in my ‘Non-memorable-female-leads’ pile. But what annoys me is that she is so painfully oblivious to Mochi’s feelings towards her. But I guess that that’s also so cliche. Overall, I don’t really have much of an opinion about her. 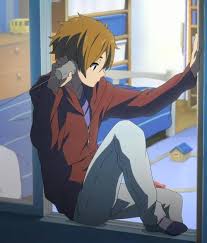 Mochizō Ōji 大路 もち蔵: Now this Tamako’s childhood guy friend. He’s also a son of a ‘Mochi Maker’ (?), however he’s the son of Tamako’s dad’s rival. But that doesn’t stop Mochi from crushing on Tamako. Now honestly, I wish that I still had a guy friend like this at my age but I kind of let him back in Singapore. Sad, I know. Anyway, I really admire this Mochi guy. He’s had a crush on Tamako since they were kids and she’s still completely oblivious about his romantic feelings to her. Which are blindingly obvious, might I add. Which I find adorable. But he really needs to confess to her or it’ll soon just get on my nerves.

Dera Mochimazui デラ・モチマッヅィ: Dera was a very lovable character and his fabulous personality was just…sophistication. I thoroughly loved this obese bird. Sure, I think that he should go on a diet because honestly I cannot even remember how he looked like before he gained so much weight. And I think Tamako should stop stuffing his face with mochi. Which brings me to my next point, even though she claims her love for mochi is unbeatable, I have never seen her consume mochi. EVER. I’ve only seen her giving them out to people. Anyway, Dera was one of my favourite characters in this series and his last name is just too funny.

Midori Tokiwa 常盤 みどり: I really like Midori at the start but after that episode where she was interfering between Mochi and Tamako, I lost all respect for her. Mochi was finally getting the courage to confess to Tamako and here you are ruining all his hard work! Have a heart woman! That’s all I have to say. 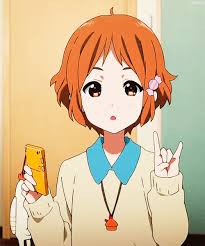 Shiori Asagiri 朝霧 史織: Sure, my first impression of her wasn’t good. I just thought that she was a bit stalkerish at the start but after a while, it was fine. Plus Dera has a crush on her so no complaints here.

Choi Mochimazzwi チョイ・モチマッヅィ: I really liked her. Plus I think that she should end up with the Prince. I also have a sinking suspicion that she’s his destined bride but she’s keeping it a secret for some reason. Why do you think they zoomed into her neck when she was in the van and why do you think that her neck is always covered? OOH. I really hope I’m right.

Mecha Mochimazzwi メチャ・モチマッヅィ: I know he doesn’t really have a lot of screen time. And I don’t have much of an opinion of him, just that he’s really short. Not that I have any right to say that. But I love his name, I know that english subtitles didn’t do a very good job of putting the point across. But direct translation: Mecha= very Mochi=mochi Mazui= bad [general sense] So Mochi tastes super bad.. How can you not love it?

That’s it for me. I recommend that you watch it for a quick slice of life pick up, plus it doesn’t take a very long time to complete this series and it doesn’t take up a lot of concentration either. But if you’re looking for more of the Slice of Life stuff. Go look up K-on! And watch the movie too while you’re at it.