I finally read the manga: Power!! And I actually stumbled across it during manga drawing class in school, I was looking for inspiration, and I just completely fell in love with it! 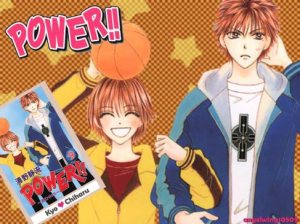 All that went through my mind, when I first saw the cover,was: Girl. Basketball. She looks like a boy.

After that I just went crazy and started looking it up.

My friend was sitting next to me and he was like: She’s going crazy again..

[And he’s more obsessed about these stuff!]

Anyway, back to more important things.

This manga was written by Shizuru Seino and it’s also know as Girl Got Game.

[I actually knew about this manga for quite a couple of years, but never dared to read it because I judged the title: Girl Got Game. So I thought it was a bad manga and didn’t think much of it.]

What I liked about this series was that it was pretty much a Shounen series as well as a Shoujo series combined.

It had that sports factor in it [basketball] and still that ‘almost innocent’ high school romance life all rolled up into around 34 chapters, with some comedy chucked into it.

Story Outline: The main girl, Aizawa, is forced to attend high school as boy. Who signed her up for this you may ask?

Her father did.  Turns out Aizawa’s dad enrolled her in as a male student since he wants her to join the all boy’s basketball team at school, to fulfill his own dreams of entering the NBA league when he was younger. [Which didn’t come true, due to an injury in his younger days.]

Life then carries on during Aizawa’s high school days where she has to share a dorm room with the main guy of our story, Eniwa.

But what I really like about this manga is that the girl ACTUALLY looks like a guy.

I mean comparing Aizawa to Mizuki in Hana Kimi, Aizawa is very convincing.

[Look for the girliest guy]

So since they actually made Aizawa look like a guy, it just seemed more realistic and there was less of that screaming: “HOW CAN NO ONE TELL THAT THAT’S A GIRL?!”

But even though, I’ve pointed this out, I have nothing against the manga series: Hana Kimi, in fact, it was my first manga that I’ve bought physically.

Of course though, throughout the whole series of Power!! Aizawa slowly looks more and more feminine as more guys find out her identity.

So, all in all, this manga was a great read. I tried not to fit in too many spoilers into this review, or it would’ve have been longer.

This manga is perfect if you’re looking for a break from those really typical shoujo series and each chapter is guaranteed to make you laugh.

If you like playing basketball but you don’t really want to read something as hardcore as “Slam Dunk!” this is also a great alternative.

I was a bit upset, however, that this series did not go on longer, I thought it ended pretty abruptly, but the ending was still pretty sweet.

Now tell me, what are you’re thoughts about this manga?

Have you read it?

What are your thoughts after reading it?